Is the Manufacturing Industry Disappearing?

September 27, 2016
A 2012 Huffington post for Canada read that the country witnessed 79 industrial plant shut-downs in 2011, which took away 14,000 jobs. At the pace which US manufacturing plants, with over 1000 workers, have been declining since 2011, it seems quite evident that the manufactured goods from countries like China are being purchased in large numbers and hence, the downfall of manufacturing companies.

The role-play of technology has become more prominent in countries like USA and Canada, and so, even though, the output of human labor in manufacturing has been good, machines have replaced most of it. So, since, the labor cost is being minimized this way, most manufacturing plants are closing outright and work is being shifted overseas. Though over 12 million workers are still employed in manufacturing, importing manufactured goods from other countries is only going to worsen the situation.

Laying the groundwork for a comeback

In the background of American manufacturing companies getting washed out at an alarming rate, there are companies in other parts of the world that are showing up and establishing factories in the USA. One of the countries making their way towards improving the present state of USA is China. According to a 2013 article by Washington Post, Lenovo, a Beijing-based computer manufacturing company, opened a new manufacturing set up in Whitsett, N.C. The company offers PCs, tablets, servers and workstations.

Even the U.S. firms that had been running operations in abroad for quite a long time are coming back. Among the ones that have announced that they will be shifting some major manufacturing operations to the US, some companies are GE, Caterpillar, and Ford. Given the current scenario, a high percentage of manufacturing comeback seems more like a challenge. But, if it comes to calculating the wage of workers in China and the USA, there is not much of a difference. Besides outsourcing of manufacturing operations can increase the shipping costs too. On the positive side, an increase in the shale gas drilling has given the United States low-cost domestic resources to strengthen the petrochemicals industry.

Policymakers in the United States are still making efforts towards fortifying domestic manufacturing. However, it should be taken into account that the manufacturing industry has transformed since the 1980s. A recent press report of MIT News described that the changing landscape of the U.S. manufacturing industry was no longer dominated by big firms like IBM, Dupont, and Kodak. The future of manufacturing, as per the news report, puts more emphasis on smaller firms that though may not have enough capital to train workers, will procure finances own their own and market new products and services in the markets.

To get to where small firms need to be in order to raise funds for manufacturing, they have partnered with neighboring universities and government institutes. In the absence of a big firm paying for the training of new skilled workers, small firms get together to allocate resources and plan community college curricula to cover up the gap that had been created by big firms. For instance, in Rochester, N.Y., the departure of Kodak gave way to small firms in the optics industry to join hands to fund for worker training.

The return of certain manufacturing jobs

How often have you used a manufacturing industry mailing list? The comeback of a certain number of manufacturing jobs will determine the proximity of the use of segmented list of manufacturing companies. There’s also the key question of how many jobs are likely to come back. If one goes through the U.S. manufacturer email address lists since 2000, as based on the report by Washington Post in 2013, the United States had 11.9 million manufacturing employees, and a goal of 1 million new manufacturing jobs had been decided upon. But, unfortunately, the results have not been very pleasant since then.

The new manufacturing jobs will differ from the previous ones, which will require fewer workers. Technological developments will continue to force out manufacturing factory jobs in the US and most nations in the world. Automation is ruling out workforce in countries Like Germany and China too. McKinsey Global Institute researched and found that robots as compared to human labor cost lesser and the margin has come down by 40 to 50 % since 1990, and is expected to fall even further. However, U.S. companies like Gillette and Procter & Gamble have benefited from run-of-the-mill products such as razors and diapers, which have become the key profit yielding products of their business. 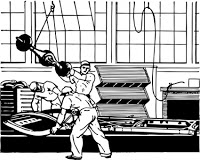 Popular posts from this blog

October 25, 2016
What Is Thought Leadership The Role of a CEO as a Thought Leader Thought leadership comes with the responsibility of processing a particular thought to making it achieve the goals that can improve the health of an enterprise. A though leader happens because the audiences, the industry and the markets recognize you as that. A proper planning and execution is required to get to the goal point estimated. How as a CEO would you want to see your company respond to new business contracts, share purchases, product purchases, technology based software purchases and legal procedures? Only you as a c-suite executive can decide on how you would guide and take guidance for some important decision-making. Thought leadership affects a company's image Be it a small company or a large enterprise, thought leadership can be elevated. This elevation can take place in a company catering to a small audience for mere promotions and then in its larger version using various contemporary plat
1 comment
Read more

Hospitality Marketers and their Data

December 27, 2013
Coming to realize the concerns of a B2C marketer, data companies like us realize the complexity of tracking targets. Favorite cuisines, ambiance preferences, locations, and work and travel behavior... wooh! that's a lot of information when it is not a business concern, and individuals only. However, we are talking about something a little more penetrative, realizing that it could be controversial at the same time. Do you remember restaurants requesting your information at the end of a meal, and you just end up leaving your office name or address at the bottom of the review. That leaves the scope for a hospitality or restaurant marketer to find out information about your colleagues - at least the ones who share a similar taste in food. We embarked upon some brainstorming last week to figure out if the complexity could be lowered at some level in the process of data-driven marketing in the B2C sphere. While collecting information from prospects and customers, restaurant and ho
Post a Comment
Read more

7 Trends in Telecommunications to Look Out For

Working as a Marketer for an IT Company?